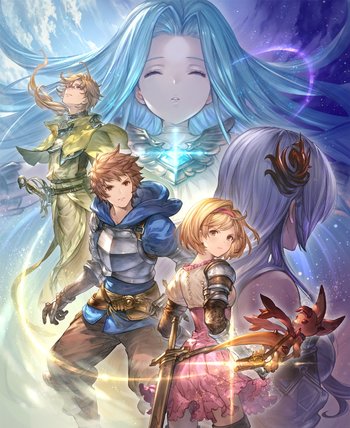 Granblue Fantasy Relink (initially unveiled as Granblue Fantasy Project Re:Link) is an upcoming Action RPG, and Spin-Off of the Granblue Fantasy video game series. The game is being developed and published by Cygames for the Sony PlayStation 4 and PlayStation 5, though Cygames has not ruled out a PC release on Steam. Cygames also intends to release the game in the West in multiple languages. The game's official website can be found here

Originally announced to be released in 2018 in the 2016 Djeeta Trailer, the game's development scope expanded to the point where any release date confirmations will only be revealed by Cygames when Relink would be close to completion. As of Granblue Fes 2020, Cygames has estimated a date sometime in 2022.

PlatinumGames was credited as co-developer until their contract ended on February 2019. Further development later moved in-house to the Osaka branch of Cygames.

Set sometime ahead of the original mobile game's third Story Arc in the Zegagrande Skydom, Relink follows the protagonist and the crew of the Grandcypher on their adventures. Cygames has stated characters who make their debut in Relink may wind up appearing in Granblue Fantasy proper.

Similar to the smartphone game, players can form a party of up to four characters - one controlled by the player, while the AI controls the others. Co-Op Multiplayer is also a possibility, allowing four players to form a party by selecting various Grancypher crew members to go on quests in a fashion not dissimilar to Monster Hunter.

The game and its trailers provide examples of: