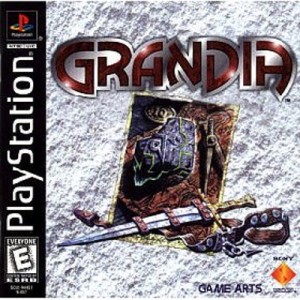 "Earthquakes are scary!"
"That was beautiful, you guys!"
"This might sting a little!"
"Deep-fried goodness!"
— Various in-battle quotes.

The first title is most similar to Lunar, taking the latter's popular 'semi-realtime' battle system and adding fully 3-D worlds. Later games would expand the 3-D to battles themselves, allowing the series to come into its own.

Mixing the turn-based battle format often attributed to console RPGs with a system of real-time action, they pause for choosing a character's next move, but other than that, characters and enemies run around the field, often trying to dodge attacks or to reach an opponent in time to interrupt their coming actions. This is especially important, since spells and attacks have different areas of effect and are vulnerable to being canceled. Consequently, with proper know-how it's even possible to end the fight without letting a single enemy attack once.