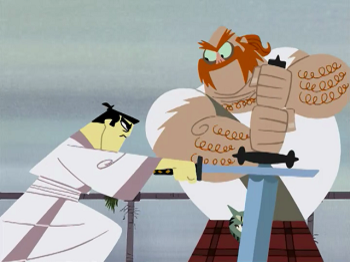 The graceful Samurai Jack, versus the mighty Scotsman. Result: A tie, and a lasting friendship.
Noel: Well, all force and no style, just like usual, huh?
Sophia: You seemed to be handling the unnecessary acrobatics quite well on your own.
— Claymore
Advertisement:

This particular trope emphasizes the Red Oni, Blue Oni relationship by having a fighting style or weapon that reflects the user's personality. This often results in having a blunt force powerhouse and a precision striker.

These fighters are either rivals or allies, but often go head to head with each other. And while they're not exactly the same, the contrast between brute force and precision is always apparent whenever they show up. Elves Versus Dwarves gives at least one interpretation of this showdown. This trope could also extend to gender roles, with the male fighter typically using force and the female fighter using finesse.

Subtrope of Opposing Combat Philosophies, and supertrope to Male Might, Female Finesse. Can be related to Brains and Brawn and Brains Versus Brawn, depending on if finesse coincides with intelligence. The Red Oni in a Red Oni, Blue Oni pairing is likely to use force, while the Blue Oni typically relies on finesse.