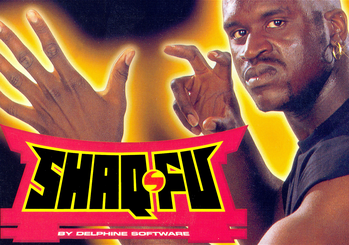 As You Know, "Kung fu" or actually "Gongfu" in pinyin (Chinese: 功夫, literally "achievement through sustained effort") is a collective term for a number of fighting styles which have roots as ancient as the 18th century BCE and have continued to evolve to this day. The greatest spike in popularity and variety of Kung Fu came in the 20th century; not only did the now-iconic "drunken boxing", "five animals" and "tai chi chuan" styles develop during that period, but upon exposure to contemporary western pop culture, Kung Fu experienced a veritable explosion of applications to a variety of professions, aspirations and walks of life other than the canonical kung.

Evidently, there was something exotic and evocative about the phrase Kung Fu and the excellence it symbolized that western culture found irresistible. Soon those privy to the great secrets of juggling liabilities and equity professed to be practicing the art of account fu, green-thumb enthusiasts the world over discovered the inner focus allowing them to transform their mere gardening skills into snip fu and high-brow enthusiasts began polishing their assorted gambits and defenses into bona fide chess fu.

Skills that were previously thought to be mundane were revealed to be awesome beyond imagination, with those graceful enough in their application often finding time speeding up and slowing down in the appropriate dramatic fashion as they snip a particularly difficult bonsai tree, perform en passant or locate the source of the $0.03 imbalance.

The term "Foo Fu" for this general phenomenon was coined Just for Pun, and basically means the same as "X Fu" or "Whatever Fu". It comes from "Foo", a placeholder often used by programmers as a stand-in for whatever should be there instead (the technical term for this kind of placeholder is "Metasyntactic Variable"

). Has nothing to do with fighting foo, despite Mr. T's confusion.

Trope Fu was originally considered as a name for this trope, but it was ultimately decided that Trope Fu is the sublime art of tending to examples and descriptions which we all practice in This Very Wiki.

This is no mere section. This is Example Fu of the highest calibre