Manga / Tomo-chan Is a Girl! 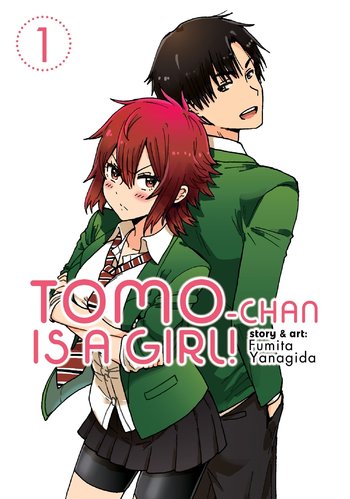 Tomo and Jun
Tomo: Jun! I love you!
Jun: I love you too, bro! [brofist]
— Chapter 1
Advertisement:

Tomo Aizawa has a crush on her childhood friend and neighbor Junichirou Kubota. On their first day together at high school, she's finally able to confess her love to Junichirou. There is only one problem... he just sees her as his buddy, because she's a girl in body only: she's such a huge tomboy, he even thought she was a boy until they went to middle school together. So, Tomo-chan's struggle for Jun's affection begins.

The manga had an unusual update schedule: instead of a weekly or monthly serialization, it updated one page every day on the web, like a webcomic. The manga began in April 2015 and concluded in July 2019. In 2018, the manga was licensed by Seven Seas Entertainment for English release and can be found here

, with publication of all English volumes concluding on late 2020. Two years later, on July 3, 2022, it was announced that the series would be receiving an anime adaptation that would air on Crunchyroll.

Tomo-chan Is a Girl! provides examples of:

Tanabe: I could give them a push... somehow... maybe...
Misuzu: DON'T YOU DARE.
Tanabe: Oh... s...sorry! Of course you don't want anyone meddling in your friend's love life.
Misuzu: You just became friends with Junichiro recently, correct?
Tanabe: Huh? Yeah...
Misuzu: Then listen up. The only one who gets to meddle with those two is ME.
Tanabe: O-okay!
— Chapter 30