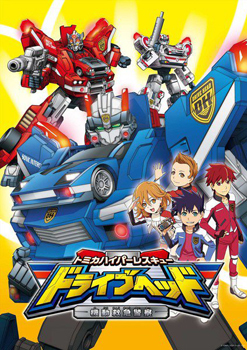 Tomica Hyper Rescue Drive Head Kidou Kyuukyuu Keisatsu (or Drive Head for short) is a mecha anime series co-produced by OLM Incorporated and Xebec.note with Asread, A.C.G.T., Magic Bus and Asahi Production The first season began airing April 15, 2017, and ran for 37 episodes. It was followed up by an 8-episode web series in January 2018, with one episode released on the third Saturday of each month, as well as an hour-long theatrical movie in August of the same year.

Drive Head also had a live-action tie-in show known as Drive Head News Channel, which streamed on Youtube. While the show was largely a vessel to advertise the movie, it was also known for annihilating the fourth wall and providing nonsensical answers to fan questions, submitted via twitter, letters, or phone calls.

Drive Head is a Merchandise-Driven series, made to promote Takara Tomy's "Tomica" line of miniature toy cars (in particular, the rescue-themed Tomica Hyper Series sub-line). This is the first anime series based on the line, although there were two Toku series, Tomica Hero Rescue Force and Tomica Hero Rescue Fire, which predate it, as well as a few CG-animated web shorts.

The story is set in the not-too-distant future. In order to deal with an increased amount of disasters and crimes beyond human comprehension, the Mobile Rescue Police developed Drive Head robots, which can do police, firefighting, and ambulance work. The Drive Heads actually consist of small cars called Vipers, which combine with metallic frames to take their robotic "Walker Vehicle" form. Then, the Drive Heads can perform Synchro Fusions with various support vehicles, to unlock additional abilities.The Drive Heads are driven by 4 elementary school students, Gou Kurumada, Taiga Yagura, Jin Ishino and Mikoto Ishino. However, the fact that they're drivers must be kept a secret from the public, in order for the kids to continue living normal lives.