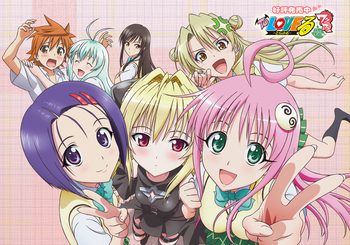 Trust us, we went through hell and back to find a good SFW image for this article.
Advertisement:

Rito Yuuki is a hapless high school teenager who's hopelessly in love with the shy, gentle Haruna Sairenji, but just can't work up the nerve to confess his feelings. One night while taking a bath, however, a gorgeous (and naked!) alien princess named Lala Satalin Deviluke crash-lands into his bathtub, and things just spiral out of control from there...

Written by Hasemi Saki and illustrated by Kentaro Yabuki of Black Cat fame, To Love Ru is...well, you probably haven't seen fanservice until you've seen or read at least a minimal amount of this series. The Shonen Jump manga To Love Ru: Trouble ran from 2006 to 2009. An Animated Adaptation made by Xebec ran for 26 episodes in 2008. Six OVAs were released, and a second TV series, Motto To LOVE Ru, aired 12 episodes June 2010.

The author and artist reunited for a Spin-Off/sequel manga titled To Love Ru Darkness, that ran from October 2010 to April 2017, meaning it actually outlasted the original work by a wide margin. It was centered around Momo's plan to share Rito with the others whose happiness depends on him, and an unknown antagonist who controls several assassins similar to Yami, as well as Yami's Dark and Troubled Past. While characters of the original manga return, Darkness promoted both Yami and Momo to main characters and significantly downplayed the original protagonists. The fanservice in Darkness was amped Up to Eleven, to the point Rito "Accidental Pervert'ed" his way through at least five heavy make-out sessions with entirely different women, and some scenes are outright softcore porn. An anime adaptation premiered in October 2012, and a second season in summer 2015.

Due to its fanservice-heavy nature and the fact that it was published by Shueisha (part-owner of Viz Media, who would never touch this series with a ten-foot pole), it was long assumed the manga would never make it to North America, though the various anime had. However, Seven Seas Entertainment ending up getting the rights to the manga and started publishing it in 2017.

Manga of the To Love Ru series include the following:

Anime adaptations of the To Love Ru series include the following:

Note that "To Love Ru" is a multilingual pun on the word "trouble"; in Japanese, these are pronounced identically (toraburu).

Advertisement:
open/close all folders
Tropes Present in To Love Ru and Motto To Love Ru

To Love Ru and Motto To Love Ru provide examples of: