WARNING: The train on bound to this station contains unmarked Late-Arrival Spoilers for Shinkansen Henkei Robo Shinkalion. Please be advised to approach this station with caution and care as the train arrives to its destination. Thank you and have a nice day! 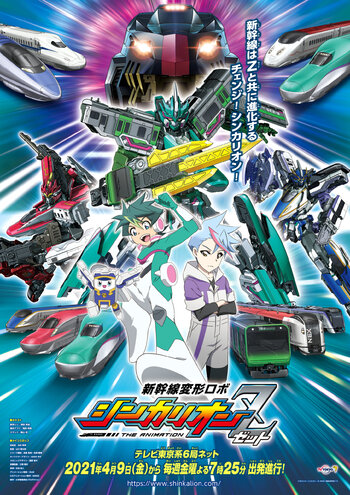 Some time after Shinkalion, a new generation of Shinkalions, known as Shinkalion Z, are being built. Shinkalion Zs are built alongside Zailiners, zairaisen (conventional trains) that transform into armours that compliment each of the new Shinkalions. However, the SUEI is still looking for suitable drivers. Not helping is that Abuto Usui, the Child Prodigy who helped design the Shinkalion Zs and Zailiners and is one of the few drivers the SUEI has actually trained by this point, doesn't have a high enough compatibility rating.

Enter Shin Arata, a mythology and cryptid buff who stumbles upon the SUEI and proves to have a sufficient compatibility rating, allowing him to become driver for the Shinkalion Z E5 Hayabusa.

But just as Shin's compatibility is proven, a new group of Giant Monstrous Beings arises, and Shin and Abuto's destinies proceed on winding (and crossing) tracks…