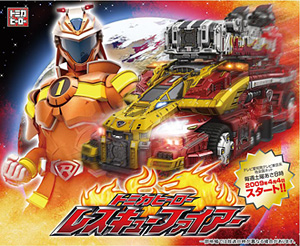 A 2009 tokusatsu that is a direct sequel to the successful Tomica Hero Rescue Force. Like its predecessor, it takes the Rescue genre and tries to make it as ridiculously cool as possible, but this time it focuses on firefighting.
Advertisement:

The series focuses on the Super-Fire Specialist Team, a newly-created division of the United Fire-Defense Agency (which Rescue Force was a part of). Due to global warming, an insidious group of demons known as the Fire Tribe have been released from captivity inside the polar ice caps. The Fire Tribe have the power to create "Super Fire", which conventional fire-fighting methods are useless against. Bring on Rescue Fire and their ice-powered Wave Motion Guns!

It's just as Merchandise-Driven as Rescue Force was, but the level of sheer undiluted awesomeness is just as high as ever.