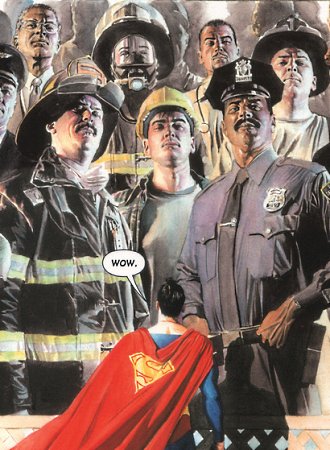 "They can be a great people, Kal-El, if they wish to be."
"Perhaps, he realized, that one of the reasons he hated that term 'savior' applied to him was that he believed he wasn't taking real risks doing what he did. Most of his actions, he felt, weren't life-threatening. He was invulnerable; almost nothing except for kryptonite could harm him. But policemen, firemen, people like these astronauts, they put their lives on the line every time they tried to help mankind take yet another small step forward. They were the real heroes, and he wished they received the acclaim they deserved."
— Superman Returns novelization
Advertisement:

In many works of fiction, heroes do good deeds on a level that would be difficult, if not impossible, for anyone in the real world to emulate. They stop wars, dismantle criminal syndicates, Save the World so often it becomes part of their regular schedule, and never shy away from performing a Heroic Sacrifice (sometimes even giving their lives for the greater good several times). Yet if the heroes run into a firefighter, volunteer worker, or soldier (if they're on the idealistic side of the spectrum), the heroes will often make a comment along the lines of, "You guys are the real heroes." They may have Real Life Superpowers to back themselves up, but it's not guaranteed.

The idea of such a scene is usually to pay tribute to real life heroes, who may not have their own TV shows or look like supermodels, but still give of themselves to save other people's lives. This is a noble motive on the writer's part, but it can create some problems if the story's Fourth Wall is firmly in place. The characters don't know they're fictional, after all; from their perspective, Superman tossing a nuclear bomb into outer space is no less real than a firefighter saving someone from a burning building. This can make the audience wonder why the story's hero considers him/herself a lesser hero than some guy who's never even saved the world once. If the main character is a superhero, writers justify this by pointing out that rushing into danger takes a lot more courage if you're not Nigh-Invulnerable or rich enough to create high-tech gadgets.

On the other hand, there's nothing that suggests that the various heroes have to be at odds with one another. Cops who handle Mooks, firefighters who fight blazes after a big showdown, and emergency workers who take care of wounded Innocent Bystanders can free up the superhero to deal with the Big Bad who's causing all the problems to begin with. Likewise, these same emergency workers might appreciate the help of the superheroes—being a firefighter is dangerous at the best of times, but having to dodge the attacks of a flame-spitting Pyromaniac while trying to fight the fires he started risks becoming a suicide mission unless someone can deal with him. The basic point is to pay reverence to the mundane heroes who risk their lives to save others in our world.

Sub-Trope of A True Hero. Compare The Paragon (who even wants to invoke this among others).

Contrast Never Be a Hero. This trope often overlap Unlikely Hero, since some of the most heroic deeds or actions are done by the most ordinary people. Very often a trait of a Humble Hero. May also go along with I'm Not a Hero, I'm...

The Avengers hire a new recruit.

The Avengers hire a new recruit.