Our Wyverns Are Different 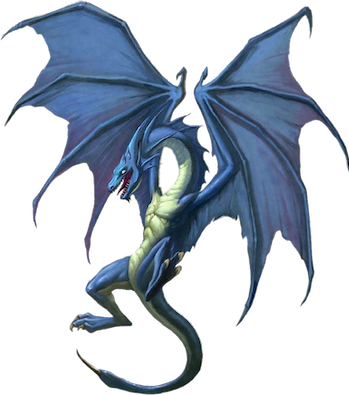 Wyverns originate from the heraldry of the British Isles, where since the sixteenth century a distinction was drawn between dragons with two legs and dragons with four (unlike in continental Europe, where this distinction was not typically made). British folklore, however, tended to use "dragon" and "wyvern" fairly interchangeably, sometimes even for creatures with no wings or, indeed, no limbs of any kind at all.

In modern fiction, wyverns are usually distinguished from other types of dragon by a number of traits in addition to their limb count:

Note that it is not uncommon in modern fiction for dragons to have this body plan but still be described as dragons and not really fit most of the other criteria such as low intelligence, birdlike postures and so on — Smaug in the last two Hobbit movies, the dragons in A Song of Ice and Fire/Game of Thrones and Reign of Fire, Vermithrax Pejorative from Dragonslayer and King Ghidorah are all examples of this. As a rule of thumb, if the work itself calls them dragons and not wyverns, then they're probably not wyverns for the purposes of this trope.

Compare other recurring types of dragons or draconic creatures, such as drakes (typically quadrupeds with weak or non-existent wings) and amphipteres (serpentine, winged and legless), which may sometimes be classified alongside wyverns as part of a category of "lesser dragons".

Subtrope of Our Dragons Are Different, and consequently of Our Monsters Are Different. Wyverns are often part of a Dragon Variety Pack. For less fantastic creatures with similar depictions, compare Kidnapping Bird of Prey and Ptero Soarer.

A massive, bone-white dragon that guards the entrance to Archdragon Peak.

A massive, bone-white dragon that guards the entrance to Archdragon Peak.