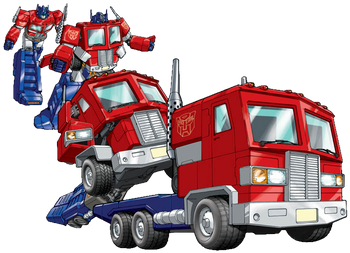 If one cool vehicle can help the hero out, then more than one can certainly be better, right? But if the hero is out with one, and needs the other, he's up the creek. Not so, for he's driving a Transforming Mecha, which can mechanically rearrange itself into a variety of different machines for different roles.

The most common form of this is humanoid/animaloid robot to vehicle. The vehicle and humanoid form will most often share parts, characteristics and details. For instance, big tough robots will change into trucks and tanks, while light fast robots will shift into fighter jets or sports cars. The design of the robot form is usually done using elements from the vehicle form, making it at least visually plausible that one can become the other without swapping anything out back at the shop. The vehicle form usually has an advantage, like a higher speed, or the ability to masquerade as a mundane vehicle.

It is, of course, also possible that the two will not resemble each other in any way, and the transformation will be based on matter replication or other semi-magical technology. The advantage to the mechanical transformation is that it's possible to design a toy that works almost exactly like the mecha on the show.

A variation, sometimes used in combination, is the modular parts system, with which a mecha can re-equip with different tools and weapons for different jobs, like the FAST packs from Super Dimension Fortress Macross or the weapon systems from Centurions. This type of system is in use in real-life militaries, which have such things as up-armoring kits for vehicles and universal hard-points on combat aircraft.

There is also the matter of the vehicle that transforms into the same vehicle, only much cooler. These are more common in shows aimed at younger audiences, but appear from time to time throughout the genre. The typical explanation being that the cooler form is the vehicle's true form, while the ordinary one is a disguise.

The physics and logistics of the transformation concept are tenuous at best. Most of the internal space of the vehicle would have to be taken up by the robot's parts, but they usually seem to have cargo and passenger room much like an equivalent mundane craft. The extra weight of the unused robot components would probably reduce the capabilities of the vehicle form, but in most cases it's faster, tougher and overall better than the non-transforming types. Even when the alternate form isn't a vehicle (such as, say, a different kind of mecha), it would be much simpler to have whatever function the alternate form is designed to do be performed by a separate, additional robot.

Frequently, it is possible to anticipate if a vehicle will transform into a robot form if it contains strangely out-of-place elements in its design, as if its engineers suddenly decided to ignore the laws of aerodynamics. Examples include strange protruding bulges and unnecessary giant hand-shaped areas. Most of the time, if the characters within a show are not aware of the vehicle's ability to enter a robot mode, they ignore these design quirks prior to the robot's first transformation. Much to their surprise, the robot changes form near the end of the pilot episode or the beginning of the second. Note, though, that there are certainly exceptions, with the tell-tale bits instead being alt-mode bits that are obvious in robot mode. (Transformers fans refer to these as kibble.)