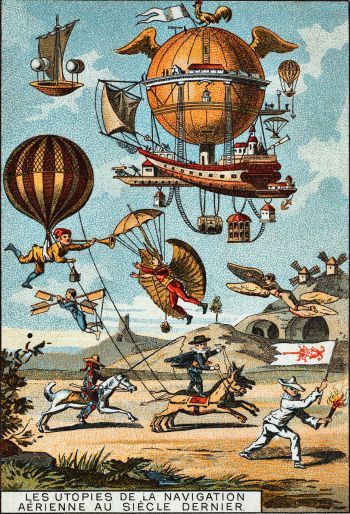 Translation from French: The utopias of Air Navigation in the last century

Once upon a time flying was not the relatively mundane commute that it is today, but an adventure into an unexplored realm, a victory over gravity that was long thought to be impossible. Flying machines were not the shiny, high-technology Cool Planes we regularly see in the sky nowadays, but fabulous contraptions cobbled together by Mad Scientists, sporting lots of spinny bits, belching smoke and fire, risky and magnificent.

This trope is for all flying machines that reflect this aesthetic, and this romantic way of looking at human flight. It is most usually found in Steampunk and Raygun Gothic works, but may also have a place in Fantasy and even Historical Fiction.

In more fantasy-oriented works, Sky Pirates may make use of their magnificent flying machines to plough the ocean of air in their search for prey. Floating Continents and a World in the Sky may or may not be involved; while magnificent flying machines can and do exist without them, Worlds in the Sky are very often host to such devices. Please don't try to take this trope too far into the realm of fantasy, though. Letting flight be entirely explained by magic, for example, would not have the same feel or meaning for the story. A flying ship kept airborne by a wizard's spell would not count as an example of this trope (though a flying ship that uses magic to drive a hundred tiny propellers very well might).

Generally, a magnificent flying machine will have one or several of the following features:

Large examples may be Cool Airships — though Cool Airships don't always follow this aesthetic, and magnificent flying machines don't have to be large (or lighter-than-air). Or cool, necessarily. While usually these craft will be treated as impressive feats of engineering — as the title implies — in some settings a primitive-looking flying machine will be Played for Laughs (perhaps as an aeronautical version of The Alleged Car). Actual use of the term "flying machine" usually suggests humour.

Actual aircraft in the early days of aviation, as well as many early unsuccessful attempts to build flying machines, may well fit here. Leonardo da Vinci deserves special mention for dreaming up many fanciful aircraft in the early 16th century (several examples below were inspired by his work). The trope likely stopped applying to Real Life sometime between World War I and World War II, as airplanes gradually evolved towards their modern form, and as large rigid airships passed their heyday and fell into disuse.