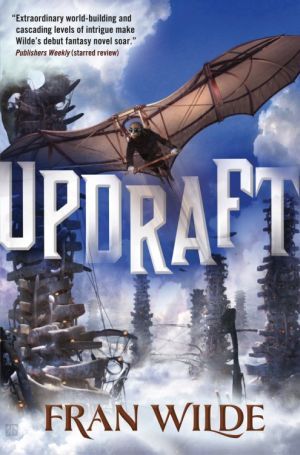 Updraft is a 2015 Fantasy novel by Fran Wilde.
Advertisement:

The book is set in a city comprised entirely of towers of living bone which rise high above the cloud-line, which people travel between using hang-glider-like wings. The protagonist, Kirit Densira, aspires to be a trader like her mother, visiting far-off places and carrying vital supplies, but first has to pass her tests. This is complicated when she ends up on the wrong side of the rules, bringing herself to the attention of the city's secretive protectors, the Singers. Kirit has a rare talent they're interested in, and they're not inclined to let her go. As she gets more and more entangled in the politics of the city and the Singers, she finds out that a lot of things aren't working the way they ought to, and the city's people aren't actually as protected as the Singers would have them believe.