Film / Master of the World 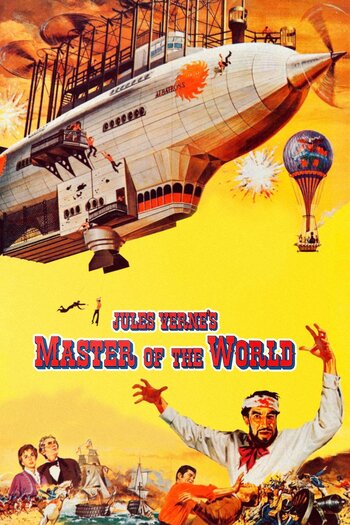 "I am a man unto myself, Mr. Prudent, who has declared war against war! That is my purpose, sir! The purpose for which this ship was built! To end for all time the scourge of warfare!"
— Robur
Advertisement:

A 1961 Steampunk Science Fiction film directed by William Witney and based on Jules Verne's novel Master of the World, with elements from Robur the Conqueror thrown in for good measure.

Charles Bronson stars as John Strock, a police investigator assigned to get to the bottom (er, the top) of the mystery surrounding the Great Eyrie outside of Morgantown, North Carolina; someone or something has taken up residence atop the mountain and begun issuing booming proclamations to the people below like a god up on high.

In an effort to see what's up there, Strock enlists the aid of industrialist and balloon enthusiast Prudent (Werewolf of London's Henry Hull), to allow him to use his dirigible, the Goahead. Along for the ride are Prudent's daughter Dorothy (Mary Webster) and his employee Phillip Evans (David Frankham), who also happens to be Dorothy's fiance. Strock and Dororthy hit it off swimmingly, much to the ire of Evans. The four aren't in the air very long before they're shot down and captured by the self-proclaimed "Master of the World" Robur (Vincent Price), who holds them prisoner aboard his flying warship, the Albatross.

The screenplay was written by Richard Matheson, adapting and combining Verne's novels Robur the Conqueror and Master of the World. Although Matheson insisted Bronson was miscast as Strock, it's a pretty basic hero role that just calls for him to be square-jawed, stoic and punch Mooks. The stoic and square-jawed Bronson is perfect for punching Mooks. As for Price, he's in top form as the Anti-Villain, providing a less manic and composed alternative to James Mason's intense Captain Nemo in Disney's earlier 20,000 Leagues Under the Sea.