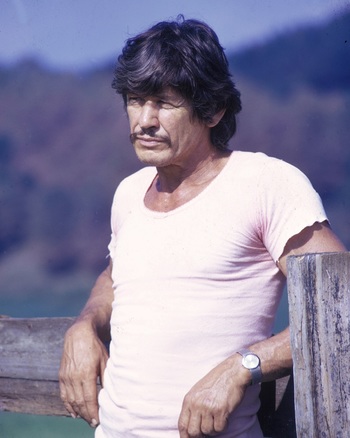 "He doesn't say much... he doesn't have to."
— Scorethefilm's Movie Blog
Advertisement:

Charles Dennis Buchinsky,note Lithuanian: Karolis Dionyzas Bučinskis better known as Charles Bronson (November 3, 1921 – August 30, 2003), was an American actor of Lipka Tatar and Lithuanian descent, and one of the biggest action stars of the 1960s, '70s, and '80s. Bronson's films typically cast him as a cop or a gunfighter, with storylines primarily focused on revenge. In these roles he was not so much an actor as a force of nature.

Bronson worked in a Pennsylvania coal mine from the time he was ten years old, until he entered military service in World War II in 1943, enlisting in the U.S. Army Air Forces and serving as an aerial gunner in the 760th Flexible Gunnery Training Squadron, and in 1945 as a B-29 Superfortress crewman with the 39th Bombardment Group based on Guam. He was awarded a Purple Heart for wounds received during his service.

Bronson's acting career began in 1950, though he wouldn't be known by that name until 1954 when he changed it on the suggestion of his agent, who feared that an Eastern European last name would damage his career due to The Hollywood Blacklist which was going down around that time. He also appeared on television during the 1950s and 1960s, including the lead role of the "Apache Kid" in the TV series Sheriff of Cochise, though his big-screen career wouldn't really take off until his role as one of The Magnificent Seven in 1960.

Bronson would later go on to play in many more movies, including Battle of the Bulge, The Great Escape, and The Dirty Dozen, but his first big lead role was that of Harmonica in Sergio Leone's masterpiece Once Upon a Time in the West in 1968. He was originally considered for the role of the Man with No Name in A Fistful of Dollars, but Bronson turned down the role, which instead launched Clint Eastwood into stardom himself. He would go on to star in many action movies, including Red Sun, The Valachi Papers, and The Mechanic (1972), but perhaps the most memorable of his roles was that of Vigilante Man Paul Kersey in the Death Wish series.

In addition to the Death Wish series, Bronson's later work was done with Cannon Films with director J. Lee Thompson, who made ultra-violent films such as 10 To Midnight and The Evil That Men Do. An unusual role for him during this period was as the real-world murdered American coal trade unionist Jock Yablonsky in the Made-for-TV Movie Act of Vengeance, which despite its typical title was a serious and relatively non-violent political drama. His last big-screen role was the final installment of the Death Wish series, Death Wish V: The Face of Death, in 1994.

Bronson died of pneumonia in 2003, leaving quite a legacy behind him.

There is a Belgian Comics series named Archie Cash, where the titular character is a Charles Bronson lookalike. Hogun of the Warriors Three was also initially drawn to resemble Bronson.