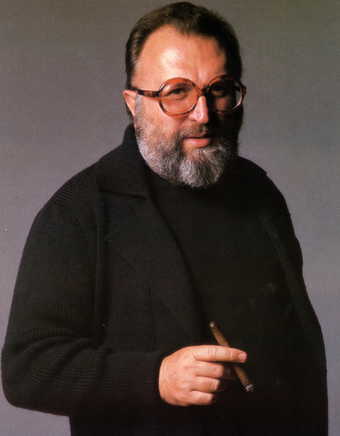 "Cinema takes violence from life. Not the other way around."
Advertisement:

Sergio Leone (3 January 1929 – 30 April 1989) was an Italian film director who almost single-handedly launched (and directed the most memorable movies of) the mid-sixties/early-seventies cycle of Spaghetti Westerns.

Leone was literally born into cinema: his father was silent film director Vincenzo Leone (often credited as Roberto Robertinote Leone's Americanized pseudonym on A Fistful of Dollars, Bob Robertson, was an homage to his father), and his mother actress Bice Valerian. Although born in Naples, he spent most of his childhood in Rome, where he attended school with his future collaborator Ennio Morricone. His father took part in the anti-Nazi Resistance in Rome during World War II but forbade his teenage son to join him. Leone initially intended to become an attorney, but after several semesters at law school, dropped out to follow his father's footsteps instead.

After the war, Leone began his career as an assistant director, notably working on Vittorio de Sica's Bicycle Thieves and as an assistant to producer Dino de Laurentiis. In the 1950s he also served as an assistant on various Hollywood productions which filmed at Rome's Cinecitta studios, including Ben-Hur (1959) and The Nun's Story. Finally, in 1961 he was offered his debut film, a Sword and Sandal epic called The Colossus of Rhodes. As the sword-and-sandal boom had faded by then, Colossus was not a major hit. However, in 1963 Leone was approached by Jolly Film to direct a low-budget Western, and the rest is history.

Besides his directorial career, Leone produced a number of movies through his studio, Rafran (named after his children, Rafaella, Francesca and Andrea) in the '70s and '80s. Besides My Name is Nobody, his most successful were a series of comedies directed by and starring Carlo Verdone. At the time of his death, Leone had several projects in gestation, including a film based on the World War II Siege of Leningrad.