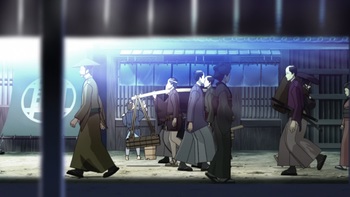 (The following description should ideally be read under falling Cherry Blossoms.)

was deposed. The time subdivisions most often found in Japanese media include the Sengoku Period

(after Japan was united under the Tokugawa shogunate, 1603–1868),note For the curious, the 30 years in between those two is called the Azuchi-Momoyama Period; important in history, not so much in media. and the Bakumatsu/early Meiji Period

Jidaigeki can be idealized or realistic, operate as rigorous Historical Fiction that show their work. It can also be like the American Western, soapy drama or hardass action, and feature a rich cast of character tropes. Jidaigeki that emphasize swordplay are often referred to as chanbara (meaning "sword fighting"), especially the live-action movies, and counted on for lots of hot Samurai action (Ninja, Rōnin, and Yakuza are also frequent players).note Although, it's also been said that if a critic likes a particular film, it's jidaigeki, and if they don't, it's chanbara. Given the fact that there are plenty of Edo-era buildings in Japan still standing, and that Edo-era costumes are dime-a-dozen, that period appeals a lot to Japanese TV producers. Compare the sheer number of BBC costume dramas set in the Victorian era, or the innumerable Chinese films and series set during the Qing dynasty.

The Jidaigeki films considered most notable by Western audiences tend to feature samurai, and from this they tend to assume that the term Jidaigeki refers to samurai films in particular. This is an exaggeration. Jidaigeki basically means historical settings or something set in the past, and does not by itself concern samurai or ronin by default. A number of Jidaigeki exist that focus on women, on painters, actors, and even burakumin (the lower-caste Japanese underbelly who are the ancestors to Yakuza). In the classical era of Japanese cinema, Jidaigeki was the most prestigious and serious genre.

Also, although it may seem American and European directors have been borrowing (or, depending on your POV, appropriating) these conventions — sometimes whole plots — for years, Jidaigeki pieces have long borrowed/appropriated in equal measure from Westerns and Film Noir. Akira Kurosawa, himself, was known to be a fan of director John Ford. George Lucas took some inspiration from this cross-pollination while writing Star Wars — guess where he got the word "jedi". Even before that, Jidaigeki borrowed and took inspiration from American films (e.g., Stella Dallas, a popular melodrama in Japan) and from European drama (e.g., Henrik Ibsen and Leo Tolstoy). Kurosawa likewise won fame for his transpositions of William Shakespeare to feudal Japan. Klingon society as seen in Star Trek: The Next Generation also took from this era for inspiration.

For Western depictions of Japanese history, see Hollywood Medieval Japan. Compare The Middle Ages and The Wild West, two popular Western historical periods that are roughly analogous to Jidaigeki. See also Wutai for Fantasy Counterpart Cultures that are based upon Japan. Related to Samurai Stories and Ninja Fiction, which focus on fictional works that focus on the samurai and shinobi respectively, usually overlapping with Jidaigeki.

Some notable historical names that have been originating from this era include:

Examples of shows taking place in this era: