Video Game / Soul of the Samurai 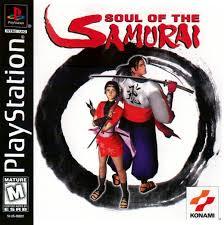 From left to right: Lin and Kotaro
Advertisement:

Soul of the Samurai (known as Ronin Blade in Europe) is a 1999 Action-Adventure game released by Konami on the Sony PlayStation. You have two characters to select at the beginning of the game: a male character who is more or less good at both offense and defense and a female character who is faster, yet deals less damage. You fight enemies across pre-rendered backgrounds with fixed camera angles and do some puzzle-solving usually by picking up an object somewhere and inserting it elsewhere.

You may have seen that before: this game is clearly inspired by the Resident Evil series in their gameplay, yet they manage to stand-out in their own in some ways. The combat is sword-based here, where you press the attack button a number of times to perform the full sequence. Opponents are usually weapon-wielders as well who can block your attacks, so you must use the dodge and parry mechanisms to deal with them.

The game takes place during the era of Tokugawa Shogunate. The plot begins the two characters mentioned above who meet on a Dark and Stormy Night. When Lin is ambushed by some guards, Kotaro steps in to help her. Their paths then split: Kotaro has just returned to his hometown to pay his dead parents respect and Lin investigates the disappearance of her brother, Shin. However both will find themselves entangled in a plot involving the demonic plague known as the “Soul Bugs”.

Despite falling under the radar, it is still a game worth playing at least once. The graphics are not bad and the soundtrack is quite enjoyable, mixing rock, hip-hop and techno with traditional instruments. The combat is simple yet effective, but the game is a bit on the short side.

Tropes present in the game