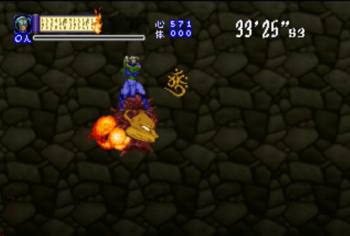 If your ninja game doesn't allow you to ride on a severed kitsune head, you're doing it wrong!
Advertisement:

The game plays out like an arcade Run-and-Gun-style shooter, set in an alternate version of Feudal Japan infested by assorted Yōkai and demons.

The titular hero, Taromaru (on two-player mode, the second player assumes the role of Taromaru's comrade Enkai), is a "psychic" ninja, trained in both combat, ninja acrobatic skills, and also magic, with the ability to fire powerful electric blasts from his bare hands. On the trail of a kidnapped princess, Taromaru travels the land while battling assorted enemies, ranging from ninja mooks to the undead and all sorts of demons.

Spiritual Assassin Taromaru, as noted by various reviewers (including Kurt Kalata from Hardcore Gaming 101) is a borderline Boss Game, starting from the second half, where the game starts throwing boss encounters en-masse at the player, many of them lifted from Japan's rich collection of yokai myths. There's at least 15 bosses in total (excluding multiple Mini-Boss encounters), each one more colourful than the last, and it's amazing.