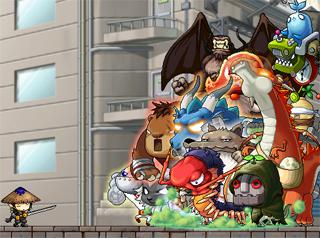 Have fun!
"It's the Big Bossdown! Clobber all the bosses we've met so far on the adventure in a timed battle."
— Moe, The Legendary Starfy
Advertisement:

The video game version of Run the Gauntlet. A segment — usually near the end of the game — in which you're forced to fight a collection of previously defeated bosses in sequence, often with little-to-no pause to heal or recollect spent resources in between. Depending on the game, the bosses may receive upgrades in order to remain challenging, or they may simply be a parade of Degraded Bosses that will drop like flies when faced with your improved arsenal, or they may be as deadly as they originally were in games where your character doesn't get an improved arsenal.

Occasionally this takes the form of a single enemy who simply mimics the other bosses' attack patterns. Some games feature the Boss Rush as an optional extra Arrange Mode after the normal game is completed, rather than taking place near the end of the game, and sometimes with Superbosses or even the True Final Boss exclusively appearing at the end of it.

It's a bonus if the Boss Rush is actually explained (if not, it could be considered as a special case of Artifact Mook instead). Part of the reason this trope exists is to reuse assets made for unique bosses on the already limited memory constraints of classic games. Most of the time, it's just an extra challenge.

Sub-Trope to Boss Bonanza, which covers any collection of bosses fought in sequence, previously-defeated or not. Not to be confused with a Rush Boss. If a game is just more or less one big Boss Rush, it becomes a Boss Game. Compare Boss-Only Level, which is one boss that takes up a whole level. For examples of games having an option to replay boss fights outside the normal playthrough and without any sequence, see Replay Mode.