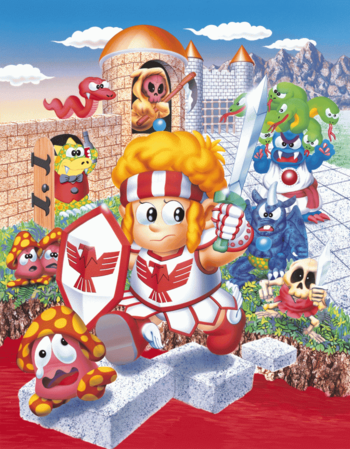 Wonder Boy in Monster Land, is the second game in the Wonder Boy series. A departure from the original Wonder Boy, rather than being a standard platformer like the original, Monster Land employed a more action RPG-like approach to its game design, allowing the player to equip his characters with swords, spells and various pieces of armor. The player controls a young lad named Bocke Lee Temjin as he sets out to rescue the country of Wonder Land, which has been taken over by an army of monsters led by an evil dragon.

It was originally released as a 1987 arcade game called Wonder Boy: Monster Land in Japan, with an international release for the Sega Master System in 1989. The Mark III version was titled Super Wonder Boy: Monster World in Japan, making it the first game in the "Monster World" sub-series. Computer versions were also released for the Amiga, Atari ST, ZX Spectrum, Commodore 64 and Amstrad CPC, along with licensed remakes for non-Sega platforms such as Bikkuriman World for the PC Engine and Saiyuki World for the Famicom. Similar to its predecessor, it was also re-released as "Super Adventure Island" for cell phones in 2006 (not to be confused with the actual Super Adventure Island, released for the SNES in 1992).