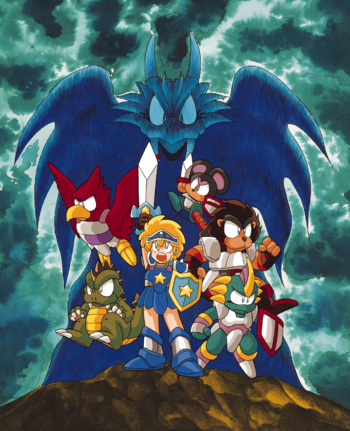 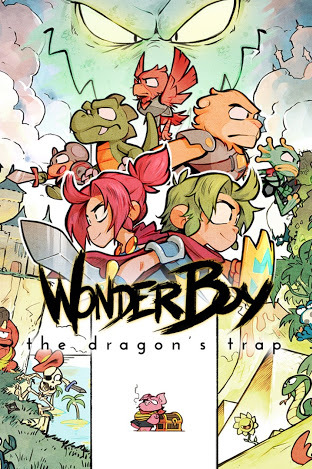 With Wonder Girl and her Hu-Girl form introduced.
Before you is the Monster World. Overcoming various hardships, you have at last entered into the Monster's castle. Your target is the dreaded dragon's room. But unbeknownst to you is the fact that the dragon has the power to invoke curses on his enemies​.
- Original introduction text
Advertisement:

Wonder Boy III: The Dragon's Trap (known in Japan as Monster World II: Dragon no Wana) is the fourth game in the Wonder Boy series. After being defeated by Wonder Boy following the end of Wonder Boy: Monster Land, the Meka Dragon places a curse on his slayer. Wonder Boy turns into a Lizard-Man and now has to regain his human form, gaining other transformations in the process. Being made for consoles rather than an arcade game, The Dragon's Trap ditches the stage-based format of previous games in favor of a free-roaming approach.

The Dragon's Trap was originally released for the Sega Master System in 1989, followed by a portable version for the Game Gear in 1992. Hudson Soft also released a TurboGrafx-16 version titled Dragon's Curse in 1990 (released in Japan as Adventure Island in 1991).

The remake has released in April 2017 on the Nintendo Switch, PlayStation 4 and Xbox One, with PC in June, and has received critical acclaim for its HD artwork and remixed music, and is so faithful to the original gameplay that it can switch between the old visuals/music/sound effects and the new with a simple button press seamlessly. The game also provides an option to play as Wonder Girl, an alternate female version of the protagonist.

Tropes in The Dragon's Trap: