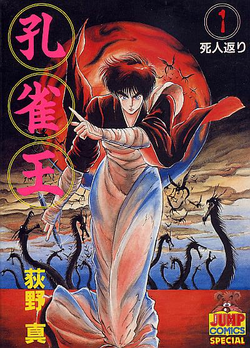 Peacock King (known as Kujaku Oh in Japan) is a Weekly Young Jump seinen manga series by Makoto Ogino. The manga ran from 1985 to 1989 on Weekly Young Jump. It stars the main character Kujaku, a modern-day Buddhist monk and member of the Ura-Kouya, a secret organization specialized in demon hunting. The series was followed by an 11 volumes series, Kujaku Oh: Taimaseiden, a 12 volumes series, Kujaku Oh: Magarigamiki, and prequel, Kujaku Oh Rising along with Kujaku Oh: Sengoku Tensei that ran from 2012.

The manga was adapted to two OVAs series in 1988 and 1994 by Madhouse, being both translated for the US market as Spirit Warrior. The first, written by Sho Aikawa, was composed of three episodes that contained a mix of plot points of the manga and wholly original stories. The second, retitled as Shin Kujaku Oh and directed by Rintaro, adapted a later arc in two episodes, though it deviated oddly from the manga by treating the arc as a self-contained story with its own origin and closure instead of being part of a series.

Two Hong Kong movies, Peacock King and Saga of the Phoenix, were also made, and Sega published two games for their consoles, Kujaku-Oh for the Sega Master System and its sequel, Kujaku-Oh 2, for the Sega Genesis. Neither game retained the license for their exported versions, with the former being renamed Spellcaster, while the latter became Mystic Defender.