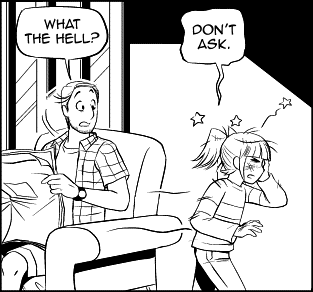 "Some honcho in a cushy office on Earth says go look at a grid reference in the middle of nowhere, we look. They don't say why, and I don't ask. I don't ask because it takes two weeks to get an answer out here and the answer's always 'Don't ask.'"
— Al Simpson, Aliens
Advertisement:

A Stock Phrase That comes up in several situations:

Sometimes the statement is made preemptively, before the other person can even ask a question. Usually used to avoid recapping events the audience has already witnessed, or used to set up a Noodle Incident.

Has nothing to do with the now defunct military regulation called Don't Ask Don't Tell.note This also included "Don't Harass Don't Pursue." Or the Lost Boy literally named "Don't Ask."

See also You Do Not Want To Know and Preemptive "Shut Up".