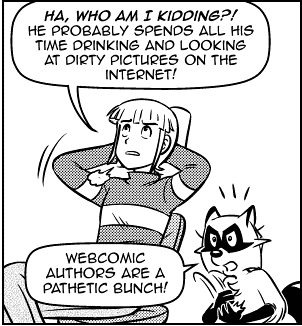 Stan: You see, Mabel, those monsters are just tiny clay figures moved around one frame at a time by an anti-social shut-in.
Soos: Those people are called "animators".
— Gravity Falls, "Little Gift Shop of Horrors" ("Clay Day")
Advertisement:

The author wants to portray their character as a loser but doesn't want to offend people in any particular occupation. So they make the character's occupation their own. This allows for a lot of Self-Deprecation, which is probably the whole point. It also means that the parody will be much better informed than one from someone who knows less about the profession - being on the inside means they include anecdotes and details that other scientists or teachers or priests or whatever will find greater recognition and (hopefully) humour in.

The loser cartoonist can't draw, the writer has an obviously Mary-Sue version of him/herself, or some other type of Stylistic Suck. These characters may also be prone to extreme Writer's Block, which can justify the times that they aren't working/don't have a job.