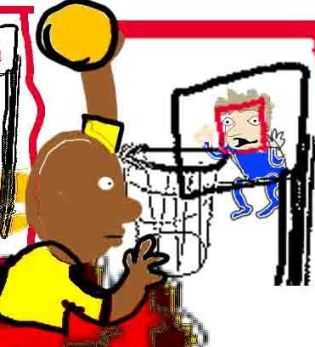 where doing it man
where MAKING THIS HAPEN
Making something that is bad on purpose - and not bad inadvertently, which is my usual process - is a whole-body thrill. It goes hard against every natural instinct to write this way. It has the delicious and irresistible texture of sin.
— Jerry Holkins from Penny Arcade about this

A medium or Show Within a Show or other Meta Fiction is presented in an intentionally bad style. The most conspicuous aspect of this is the dialog, in which one can expect the characters to speak in a stilted, mechanical tone for no apparent reason at all.

This is much easier to distinguish from So Bad, It's Good when it's applied to a Show Within a Show, or when other works by the author are of better quality.

Unabashed B-Movie Fan is related, though in that case the focus is on the audience of the Show Within a Show rather than on its writer. See also Rule of Funny. This is often the result of an Amateur Film-Making Plot. It can also overlap with Only One Finds It Fun for when one character doesn't see how bad it is.

It's been suggested by various movie critics that this is done solely because it would be irritating to the viewer and humiliating to the writer if the story within was a lot more interesting than the story around it (though an enterprising author could release it as a spin-off, not unlike the real-life Radioactive Man comics), so they do what they can to kill it while retaining its purpose.

May overlap with The Power of Acting.

"Rize of the Fenix"

The "unfinished" Rize of the Fenix music video is full of failing special effects.

"Rize of the Fenix"

The "unfinished" Rize of the Fenix music video is full of failing special effects.