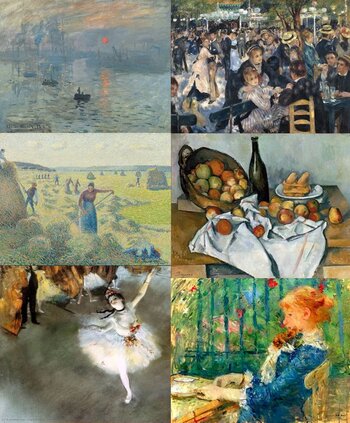 The one that started Modern Art.

The original impressionists — Claude Monet, Auguste Rodin, Pierre-Auguste Renoir, Edgar Degas and Paul Cézanne — made their official debut at the Rue du Capucines in Paris in 1874, the style's name being coined from the Monet submission Impression, Sunrise in what was originally a negative review. The public, critics and traditional painters and sculptors were not very receptive to any of it, seeing these artists as a group of undisciplined amateurs calling themselves masters with the era-equivalent of making fridge-drawings and calling it "Museum-worthy", but there has never been an art movement without its detractors.

The Impressionists made history by breaking a lot of artistic traditions and standards. First of all, art was no longer a tool used to glorify the powerful and the fantastic. Art was a tool of institutions and the aristocracy, used to depict kings and Christ as these great, immortal paragons. With paints becoming more easily available to the lower classes, the Impressionists saw a sense of beauty in the common man. Landscapes of beaches and meadows, portraits of everyday people at leisure, things people could relate to.

Secondly, they actually left the studio. They carried all of their paints and chemicals and easels on location and painted what was in front of them. The tides didn't stop for Canute and the world wouldn't stop for anyone else either, so these painters and sculptors had to work fast. This resulted in fast brush strokes and a laissez-faire application of the Elements* color, form, line, shape, space, texture, and value and Principles* balance, emphasis, movement, proportion, rhythm, unity, and variety of Art. The invention of photography had made the idea of capturing reality feel redundant, so they had taken the subjective philosophy of the Romantics and ran with it.

The term has also been used to describe certain musical compositions by various French composers such as Claude Debussy and Maurice Ravel (though neither composer embraced the label for their work). Such music tends to have a lush and understated feel, colorful sonic profile, and triadic if not always traditionally tonal harmonic language.