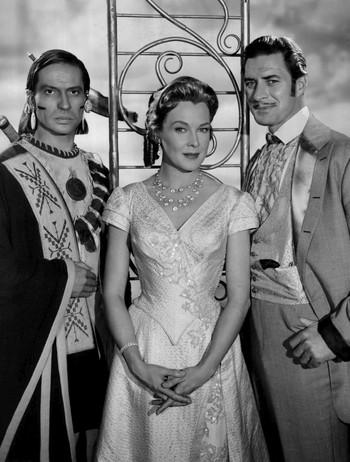 Yancy Derringer is an American Western series that was broadcast on CBS from 1958 to 1959, with Jock Mahoney in the title role.

Yancy Derringer is a Gentleman Adventurer living in New Orleans, Louisiana, after The American Civil War. Widely respected, he is hired by the city administrator, John Colton, as a secret agent authorized to help maintain law and order and justice in the city by any means that may become necessary. His constant companion is a Pawnee Indian who communicates with him only by hand gestures, and appears ready at a moment's notice to use the shotgun that he always carries. Yancy owns a riverboat, the Sultana, and lives at the former family plantation, Waverly. Madame Francine, the strong-willed, beautiful owner of a members-only gambling house in New Orleans, is his Love Interest. Miss Mandarin is the proprietor of his hangout, the Sazarack Restaurant.

Tropes used in Yancy Derringer include: