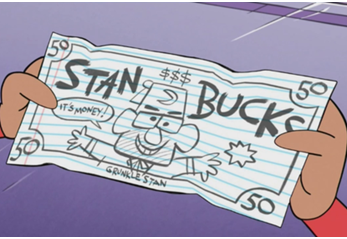 Seems legit.
"We're in the basement, learning to print
All of it's hot!
10-20-30 million ready to be spent
We're stackin' 'em against the wall
Those gangster presidents"
— The B-52s, "Legal Tender"
Advertisement:

Instead of robbing or stealing directly, some criminals prefer to make fake bills — that way, not only do they not have to pay for whatever they're "buying", they get real money back as change. It can be anywhere from one dude operating a low-grade printer out of his garage to a gang using a top-end press making super-bills. Sometimes, this extends to creating fake coins as well.

In other words, "Screw the rules, I make my own money!"

When Played for Laughs, there will be a GLARING difference between real and fake bills, like the counterfeiter's face instead of Benjamin Franklin or Queen Elizabeth, or "unconventional" denominations such as a $37 bill.

Counterfeiting rings tend to be popular villains for Kid Detectives and other G-rated heroes, since the crime is serious enough to call for legitimate secrecy and cunning, but not instantly synonymous with Family-Unfriendly Violence like robbery or drug-dealing. That said, don't expect every counterfeiter (fictional or otherwise) to be a pushover; it takes a lot of muscle to carry all those printing plates, after all...