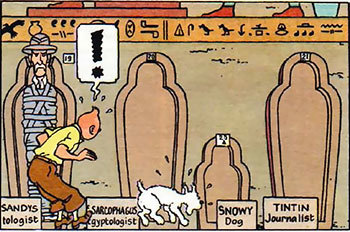 "Under my feet was a tombstone carved with a death's head under which I was to be buried; it was marked with my name."
— Memoirs of Frederick Baron Trenck, Written by Himself
Advertisement:

A grave or other burial site whose marker bears the name of a person who happens to be alive and well and who most certainly did not order it made (not even for staging a mock funeral) is a horrifying sight. To increase the horror, the person who discovers it will usually be the anticipated occupant.

There are three variations of this: