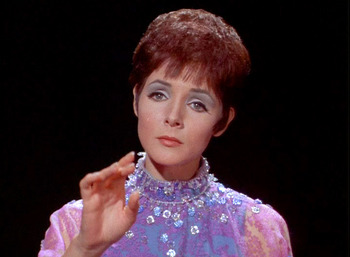 It doesn't get much more Moe than this.
Advertisement:

The Power Trio beams down to a planet in the Minaran system to rescue a pair of Federation scientists before the sun goes supernova. The scientists are nowhere to be found, but an audio/visual record they left behind reveals they seem to have vanished into thin air accompanied by an earthquake and an ear splitting buzz. Soon, our heroes are experiencing the same thing.

Fade from black. Spock's reading indicates that they are either on the set of a minimalist avant-garde play, or they're several miles below the planet's crust. They find a lovely brunette with a pixie cut and a diaphanous gown taking a nap. They wake her up to find that she is mute. Bones decides to call her Gem. (No relation to a truly outrageous pop star, or a young character from To Kill a Mockingbird, or a hyper active and immature power ranger). Soon after, they are introduced to their hosts, a pair of Sufficiently Advanced Aliens named Thann and Lal. (No relation to a certain android who learned to feel)

Doctors Ozaba and Linke are now physicians under glass. Lal and Thann maintain that they had nothing to do with their deaths. They have experiments to do, and now they have three new lab rats. They even have neatly labeled glass cases in the event that they don't survive the experiments!