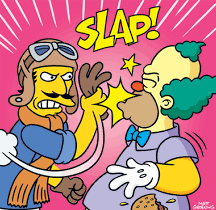 Well, that's the theory anyway. A long time ago, the trope might have been used like this. But these days it's only the stuff of laughter and parody. Chiefly, no doubt, because the chances that the duel will actually be fought are low. (People who wield guns have tended to be much less chivalrous in the post-Victorian era.)

Most of the time this trope is used in such a way that accents the absurdity of the formality. Characters who otherwise have no problem with overt acts of hostility will treat the glove as being somehow significant while still recognizing that the Glove Slap means that everything is now no holds barred.

Historical, or appropriate futuristic or fantasy, settings can still play this in earnest, particularly among the elite. The idea seems to be that the blow is brazen enough to be an unignorable insult, but light enough not to be seen as a sucker-punch.

Often accompanied by such lines as "Sir, you have insulted my honor!" or "I demand satisfaction!"

Compare with Throwing Down the Gauntlet (this trope's Real Life predecessor); also compare and contract Dope Slap, when this is done against someone for doing or saying something foolish, and Zen Slap, when a spiritual mentor gives a slap to their disciple for the purpose of enlightening them. Can be played for injurious laughs in a cartoon by using Weighted Gloves.

Not to be confused with Glove Snap.