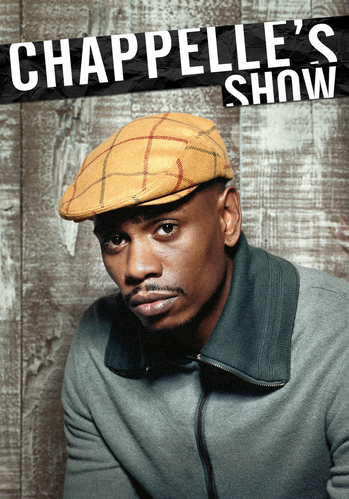 Chappelle's Show is a Comedy Central sketch comedy show starring comedian-turned-actor Dave Chappelle that ran for two (or two-and-a-half) short seasons on Comedy Central. It is mainly known for spawning a slew of catchphrases (including the Rick James quote mentioned above) and becoming one of the poster boys for a show simply being too good to last.

A stealth hit (Chappelle even joked in a season 2 promo that the show was only renewed because Comedy Central needed a show to fill in time on the schedule until Reno 911! came back), the series came into its own with its second season, becoming a massive ratings and critical hit. As such, there was much hype and anticipation for the show's third season as Dave signed a massive contract with Comedy Central that granted him a large paycheck and a considerable cut of DVD sales for the show. It was smooth sailing for the show from there on in...

Or at least that might've been the case, as it was reported that Chappelle went missing after filming three episodes' worth of sketches for his show, ultimately resurfacing in South Africa, while the season 3 premiere date came and went with no show in sight.

As fans would find out, Dave Chappelle had become disillusioned with fame and the show; his edgy, in-your-face racial humor was being taken at face value by his now predominately white fanbase, culminating in him coming to the conclusion that he had become the very thing he was mocking with his racially charged material. Adding to this was Comedy Central, who had given the show free rein for the first two seasons, suddenly sticking their noses into the production of the program, and Dave falling out with Neal Brennan, his partner and the co-creator of the show, who was reportedly more concerned with keeping the gravy train running than with his crisis (although Neal and others argue that this wasn't the case).

The network, tired of waiting, ultimately aired the filmed sketches as "the Lost Episodes" with introductions from Dave's co-stars, Charlie Murphy and Donnell Rawlings. This did not go over well with Dave, who felt betrayed since he had told Comedy Central repeatedly that any deal to have him come back would hinge on the sketches he had filmed never seeing the light of day. This effectively ended the series, as Dave has since returned to doing stand-up full time, leaving fans with the memories of the show and what could have been. Meanwhile, Comedy Central has tried to continue the format of minority-led stand-up and sketch comedy in a series format, resulting in a Tough Act to Follow the network alongside perceived cases of Follow the Leader, whether or not these are accurate.

After eleven years, several of the show's most popular characters were brought back one more time when Dave hosted Saturday Night Live in a rare public appearance since walking away from the job.