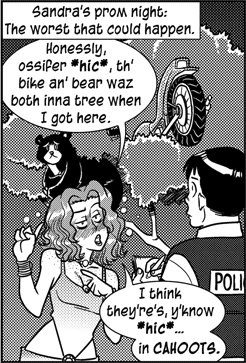 An intoxicated character is interacting with a police officer, generally as a result of a traffic stop. They are clearly impaired, but are trying to act as if they aren't. Expect an Alcohol Hic or two.

Almost always leads to Hypocritical Humor, Implausible Deniability, Blatant Lies, and/or I Resemble That Remark! Needless to say, often times it is Truth in Television. (As such, it can evoke reactions of "Dude, Not Funny!", as Drunk Driving is a pretty serious problem in real life.)

See Spoonerism for the swapping of syllables without necessarily being drunk.