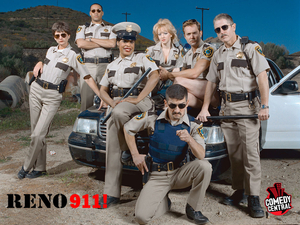 The season one cast
Advertisement:

Police officers work hard every day. They put their lives on the line, protecting the rights of you and me to feel safe. They are serious and disciplined, and do their job to the best of their ability, holding themselves to a high standard of conduct. Right?

Then there's these guys.

Reno 911! is an Improv mockumentary-style parody of COPS and similar reality shows, that ran on Comedy Central for six seasons from 2003 to 2009 and continues in reruns. Much of the material is improvised, based on a broad outline, with minimal scripted material. It features members of the fictitious Reno Sheriff's Department, videotaped in the course of their duties, sometimes addressing the camera directly as though being interviewed.

In 2020, a revival season of the series premiered on the short-lived streaming platform Quibi. While Quibi shuttered after only six months, the season, along with the rest of Quibi’s library, was acquired by Roku. A second season of the revival is set to premiere on The Roku Channel. An additional special, Reno 911!: The Hunt For QAnon, premiered on Paramount+ on December 23, 2021.