Trapped In a Tanning Bed 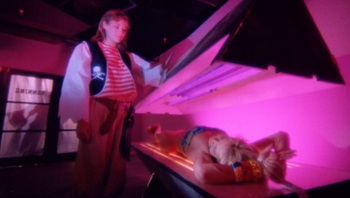 Going tanning can get you that nice, bronze look, but can also be dangerous if you're not prepared. In fiction, the risk of things like skin cancer and sunburns are still risks, but either not as immediate to get drama out of, or too common to match an exaggerated scenario. That's why you'll sometimes see characters get trapped in a tanning bed for way longer than they're supposed to, either because the person who was supposed to free them neglected to, because they fell asleep, or because it's an intentional effort to harm or kill them.

In comedic scenarios, the character will emerge with serious burns or skin damage, but it will be Played for Laughs as dark comedy with no real consequences other than something similar to an Embarrassingly Painful Sunburn. In more realistic scenarios, it's played far more seriously, and may even result in death, similar to tropes like Sauna of Death and Cooked to Death. After all, the amount of heat exposure would be deadly in real life due to factors like dehydration and the aforementioned skin damage and burning...

...So it's lucky that, in reality, tanning beds are heavily regulated worldwide to ensure the safety of the people using them. Though this scenario is common in fiction, things like heat timers, lightweight doors, and an inability to lock, means that while there's still a risk associated with the act of going tanning, you don't need to worry about this trope occurring in real life. It hasn't stopped this trope and urban legends about deadly tanning accidents from circulating, though.

Compare Sauna of Death, and contrast Locked in a Freezer.