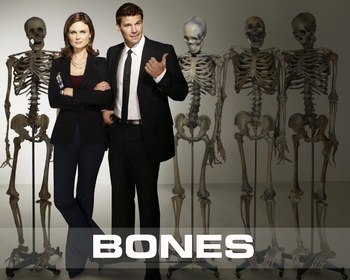 Max: Are you sleeping with my daughter?
Booth: No...
Max: Why, are you gay?
Advertisement:

Bones is an American forensic comedy-drama series created by Hart Hanson which aired for 12 seasons (2005–17) on Fox.

Dr. Temperance "Bones" Brennan (Emily Deschanel), forensic anthropologist, is the pride of the Jeffersonian Institute's medico-legal lab. She's a brilliant scientist who's traveled all over the world in the course of her work and has even used her experience in the field to write a series of bestselling mystery novels. She's the person the FBI calls when a body (usually, well, bones) can't be identified by normal procedures.

She's also aggressive, abrasive, and has all the social grace of a snapping turtle.

Fortunately for her (and the members of the public who have to deal with her), she has FBI Agent Seeley Booth (David Boreanaz) on her side. A former sniper with a young son and a laid-back loose-cannon personality, Booth is Brennan's partner in crime-solving, mutual irritation, and Unresolved Sexual Tension. With the help of a team of "squints" (Booth's terminology for The Lab Rat, because they're always squinting at things), the two of them solve murders through a mix of forensics, detective work, and occasional violence.

Bones is easy to dismiss as yet another Forensic Drama, especially considering the laxity of some of the science and the better-than-life crime recreation technology, but fans are quick to point out that the show's strength lies in its characters. The cases of the week are typically complements for their interactions and growth. The writing and science can sometimes be uneven, but the dialogue is clever and funny, also frequently peppered with moments of genuine emotion. Their behavior and interests help the audience relate to them as One of Us.

An often recurring theme is the nature of intellect versus emotion and at what point you should use which. Most of Brennan's team rely on careful logic, and in some cases are bound entirely to it. Meanwhile Booth brings Brennan along on investigations and has to help put a soft touch to her chainmail glove when dealing with people.

A recurring element is wisecracking Hodgins and stoic Zack/squintern of the week performing some absurd "test" to help solve cases. One particularly memorable one was putting a frozen pig through a wood chipper. It's a Long Story.

Loosely based on the novels and life of Kathy Reichs, professor of anthropology at University of North Carolina at Charlotte and a former-director of the American Academy of Forensic Sciences.

Has a character sheet. Not to be confused with the comic book series Bone, the musical group Bone Thugs-n-Harmony, the animation studio BONES, The McCoy, the Snoop Dogg horror film, the rapper BONES, or actual bones.

All twelve seasons are available on Disney+.

We never find out, but from the motion, its not Victoria's Secret Compartment.

I
and packaged into cans of beef stew that was subsequently fed to students at a high school cafeteria.
J-K
L
M
N
O
P-Q
R
S
T
U-Z
Feedback

After learning that Michelle was afraid that her boyfriend would press for sex while she's not ready, and that neither she nor Camille knew how to resolve this situation, Booth decided that it's time for a manly talk.

After learning that Michelle was afraid that her boyfriend would press for sex while she's not ready, and that neither she nor Camille knew how to resolve this situation, Booth decided that it's time for a manly talk.