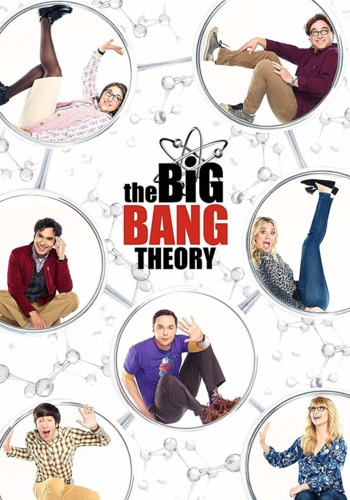 Yes, this is a picture from a show named after the event that created the universe. note Clockwise from bottom right: Bernadette, Howard, Raj, Amy, Leonard and Penny. In the middle just below the logo: Sheldon.
Sheldon: You're not done with her, are you?
Leonard: Our babies will be smart AND beautiful.
Sheldon: Not to mention imaginary.
Advertisement:

The Big Bang Theory was a CBS sitcom, co-created by Chuck Lorre, featuring four genius-level friends (with careers ranging from theoretical physics to engineering) and a pretty girl who shakes up their dependence on The Scientific Method and geeky lifestyle.

The main characters are two Odd Couple roommates, Dr. Leonard Hofstadternote (Johnny Galecki) and Dr. Sheldon Coopernote (Jim Parsons). Leonard is a mild-mannered nerd who, although awkward, is still socially capable. Sheldon is an egomaniacal supergenius who displays signs of OCD, ADHD and many other Ambiguous Disorders.

A cute new neighbor named Pennynote (Kaley Cuoco) moves in next door, and Leonard almost instantly develops a crush on her. Penny is actually a perfectly normal person with an average intelligence level, but compared to Leonard and Sheldon comes across as a Dumb Blonde. On the other hand, she is very friendly and outgoing with a vibrant social life and a multitude of interests, contrasting the shy, reclusive personalities of the guys.

Rounding out the cast are two other genius geeks who are always visiting Sheldon and Leonard: Howard Wolowitznote (Simon Helberg), a wild but unsuccessful womanizer who never stops hitting on Penny; and Dr. Rajesh "Raj" Koothrappalinote (Kunal Nayyar), who suffers from crippling mutism whenever women are around (unless he's drunk).

The fourth season added two new female characters in semi-regular roles, who would eventually be promoted to the main cast: Dr. Bernadette Rostenkowskinote (Melissa Rauch), a sweet-hearted microbiologist who is introduced as Penny's friend and co-worker, and soon formed a relationship with Howard; and Dr. Amy Farrah Fowlernote (Mayim Bialik), a Distaff Counterpart to Sheldon who gradually became best friends with Penny and eased out of her neurotic shell. These two ended up forming a Power Trio with Penny that contrasts the four guys and gives a new female perspective on the show.

The show's humor can be divided into several categories: obscure references to physics or Geek culture, every nerd stereotype the writers can think of and the culture clash between Penny and the guys. Any given episode shuffles between romantic comedy/relationship drama, indulging in an established geeky pursuit and the work lives of the characters at Caltech

. And, for the most part, the scientific and nerd references are accurate, or at least close enough that somewhere between the writing and the acting someone knows what they're talking about. The writers consult Dr. David Salzberg of UCLA for advice on scripts, dialogue and he personally maps out the white board equations.

Most of the show's drama and overarching plot relies on Unresolved Sexual Tension between Leonard and Penny.

The show ran from 2007-2019 and aired its Grand Finale May 16, 2019 with a total of 279 episodes over twelve seasons, making it the longest-running multi-camera sitcom in television history. In 2017, CBS premiered Young Sheldon, a Spin-Off featuring the younger Sheldon dealing with living in Texas as a Child Prodigy, narrated by Jim Parsons.

A transcript of episodes can be found here

Now has a character sheet, and a Best Episode crowner page

♫ Our whole universe was in a hot, dense state
Then nearly fourteen billion years ago expansion started, wait--
The earth began to cool, the autotrophs began to drool
Neanderthals developed tools
We built a wall, we built the pyramids
Math, science, history, unraveling the mystery
That all started with the Big Bang (Bang!) ♫
Feedback