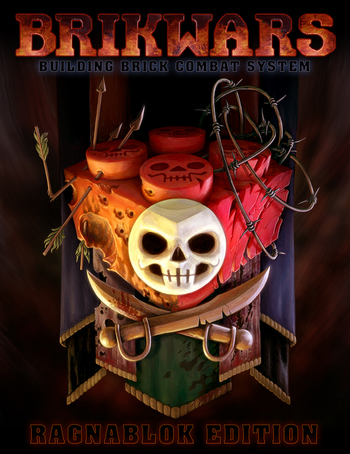 "A [construction brick] gaming system for individual level combat originated by Mike Rayhawk. It's similar in intent to other individual level miniatures games, but with an emphasis on mayhem and humor. A wide selection of 'TekLevels' allows players to simulate combat in any combination of time periods and genres."
"Like many games offered free of charge on the internet, BrikWars is appealing in concept, but in practice nearly impossible to play. Rules that appear straightforward at first become perniciously more complex with each passing chapter, almost as if the author were using the rulebook as the medium for some long-running and obscure practical joke. It's a testament to the obstinate nature of AFOLs that they've managed to play as many battles as they have, despite the author's every attempt to thwart them."
Entry from the BrikWiki online encyclopedia as of September 2, 2005, which opens the foreword for the 2005 core rules
Advertisement:

You know how when you were a little kid, you would make all your action figures fight each other in hilarious, violent combat? Have you ever tried to play Warhammer with LEGO? Brikwars

recognizes both of these matters, and is one of many proposed solutions.

A strategy game designed to be played with LEGO mini figures (though it can support any type of minifig), it acts as a way to try and play a wargame with minifigures while using something resembling rules.

It treats the matter of toy combat with all the irreverence it deserves, and the author claims that the entire thing is sort of a purposeful Take That! against "Stop Having Fun" Guys. The 2005 core rules are littered with quotes, jokes, Lampshade Hangingings, and a Take That! against anyone who deserves it. Even if you don't ever play it, the rules are an entertaining read.

Even though Brikwars can be played with any combatants with any background, the author and fans have created a setting for the game, mostly known as the Brikwars Universe. The background of this universe is found at the Brikwiki

Note: Brikwars is not officially affiliated with The Lego Group.