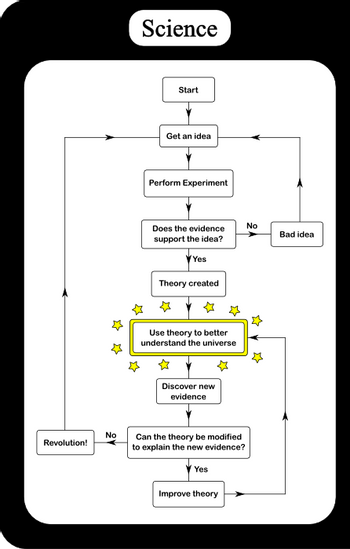 You're doing it right.
"There are two kinds of scientific progress: the methodical experimentation and categorization which gradually extend the boundaries of knowledge, and the revolutionary leap of genius which redefines and transcends those boundaries. Acknowledging our debt to the former, we yearn, nonetheless, for the latter."
—Academician Prokhor Zakharov, Sid Meier's Alpha Centauri
Advertisement:

Ah, the scientific method, hated by The Fundamentalist, loved by anyone else. Misrepresenting or outright vilifying it leads immediately into Artistic License territory.

is a collection of multiple techniques that make up a cyclic process. Of which there are multiple versions and variations. A simplification is below:

In addition to neglecting these steps (especially hypothesizing and predicting, so as to make the scientist appear more "open-minded") there are several key elements to the scientific process which fiction and news media have been known to ignore for the sake of convenience or sensationalism:

If you cannot conceive of a condition that your theory might be disproven, then chances are your theory is a Tautology -a type of Circular Reasoning. Faking, confirmation bias, Moving the Goalposts, God of the gaps, unfalsifiable theories being used in Lies, Damned Lies, and Statistics, and such have made the chance of falsifiability an important consideration in making a hypothesis. Notice how this connects to the "make a prediction" step in the scientific method; you need to make sufficiently specific predictions for your hypothesis at least partially to give Reality room to disprove you and keep everything more realistic.

None of these various principles is so ironclad that an experiment or observation that lacks it is necessarily "not science". Sometimes, a hypothesized event, such as the conditions of the universe in the seconds after the Big Bang, or the evolution of amphibians from fish, can't be repeated, but this doesn't mean there's no warrant to speculate about them based on the evidence those events left behind in the form of cosmic radiation and fossils. Other times, the nature of the subject prohibits control; climatologists can't create a second Earth to see how things would go without human industry, but this doesn't mean there can be no science of climatology.

Of the four things mentioned here, perhaps the most controversial is falsifiability, which is tightly associated with the philosopher Karl Popper. Popper thought about falsifiability as a response to what the skeptic David Hume noticed, that all science is actually based on an Argumentum Ad Nauseam-like Logical Fallacy that "if it repeats, it will happen again" (The Problem of Induction: an example is "all the swans I saw was white, ergo, all swans are white", which gets disproven once one sees, or considers the possibility of, a black swan). Under Popper's model, true science does not involve confirmation, only dis-confirmation; some scientists have called this too extreme. Meanwhile, various theories, especially "big" ones that cover a wide range of stuff (relativity, evolution, etc) have been accused of being unfalsifiable. It's possible that no single observation would totally disprove such theories (but if you've been reading along, you would remember that from the section above on repeatability). It's a matter of debate whether or not Einstein's theories truly overturned Newton's or subsumed them; like Newton's, some theories may be so well established that future observations could only "modify" them rather than destroy them altogether. There's also the pragmatist perspective, the value of a theory is determined not really by truthfulness and realism, but rather by usefulness (hence why we still use Newtonian physics in everyday engineering despite it being "wrong", Newtonian physics did not fail us and/or outlive its usefulness; it's simpler than relativity, and at those scales, its inaccuracy is too tiny to matter).

Altogether, the whole process is a lot more tedious than media would have it, but it's precisely the steady persistence over boredom and easy ignorance that give us robust models of nature which help us cure diseases and travel in space.

This doesn't have to be exclusively used by scientists. A setting with Magic A Is Magic A may have the magic users applying the scientific method to magic to improve their understanding of it. If a Straw Vulcan tries to use it, expect the method to be rather unscientific.