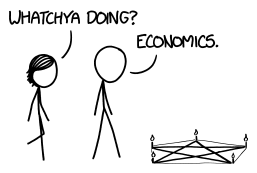 Well, yes, I can see THAT.
"All science is either physics or stamp collecting."
— Nobel Laureate, Ernest Rutherford, whose Prize was in Chemistry
Advertisement:

Many "hard" Science Fiction authors, trained as they are in the hard sciences, tend to take digs at the softer sciences in their works. The reasons for this vary, but the most common criticism is that it's much harder to perform repeatable experiments. Scientists strive towards empiricism and the "scientific method", and many humanities or social sciences are trying to study things that cannot easily be studied strictly and subjected to experimentation, which makes writers feel justified in considering them as "pseudoscience".

This happens outside of science fiction as well. Often, scientist characters in non-Science Fiction shows will disrespect the softer sciences when they have to deal with them. In real life, common targets are Psychology (see below), Psychiatry (often portrayed as the medical equivalent of the Church of Happyology, which is ironic considering that church's own attitude towards it), Economics ("The Dismal Science"), Linguistics (except by some, c.f. Sheldon Cooper), &c.. Some can have a grudging respect for economics and political science, the two that tell if they will get any money for rockets and particle accelerators, but psychology, sociology and the like are Acceptable Targets.

Think of it as an interdisciplinary Take That!. How much the rivalry is Serious Business, and how much friendly banter, depends on the people involved. It's still an influential conflict that not only has spawned new theories and schools, but became a full blown "war"

during the 90's. The standard comeback from soft scientists is that their subject is more "applicable" or more relevant to life and society at large (e.g.: as hit and miss as psychology can be, even biologists admit that neurological or even pharmacological solutions to mood disorders should only be a last resort). Another reaction is that these complaints come from those for whom science has been fetishized by, usually non-scientists, thus missing the point entirely and cheapening both.

A related phenomenon is "hard science" and business students criticizing subjects like Literary Criticism and Philosophy for being more Wild Mass Guessing and having little utility in careers outside the academic world. This overlooks actual, legitimate philosophies that adults can also make use of (like for example, studying logic and reasoning), and of course, how in Real Life businesses prefer candidates who bring different perspectives and ways of thinking to their jobs.

Also see All Psychology Is Freudian, which also contributes to how psychology became such a target - psychoanalysis is blatantly unscientific navel-gazing, but because it was one of psychology's most vocal minorities, the "psychologists sitting in couches charging 200 bucks to talk about Your Mom" stereotype became a Never Live It Down. Modern types of psychology such as behaviorism, cognitive science and neuroscience are a lot harder and more practical. In this case, calling Freudians quacks would work, but Skinner's experiments have been repeatedly verified. However, the history of scams, the possible lack of ethics - see these

, the Bedlam House, and behaviorism's possibility of abuse - and "pop psychology" in general still haven't liberated it from being an acceptable target.

Similarly, there are a number of quantitative-minded sociologists who use complex statistical methods that rival those of the hard sciences in their own research.

In another approach, this trope derives from the fact that Hard Science uses very strict methods of analysis to verify their own truth or falsehood and when said methods are applied to Soft Science the difference in method often leads to the perception of being judged harshly while Hard Researchers are just judging Soft Researchers as hard as they judge themselves.

Compare and contrast Science Is Bad and Science Is Wrong. See M.D. Envy and Not That Kind of Doctor, which can be related. There may also be a bit of overlap with A Degree in Useless, as students of the hard sciences may consider degrees in soft sciences to count as one.