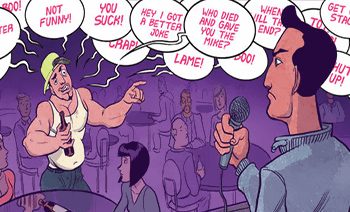 The Heckler is someone who interrupts some type of performance or activity with their own commentary, disrupting the way it was originally intended to go. Usually it is intentional, a way to get attention and possibly discredit whatever they are heckling.

This character is a good way to involve conflict, as their very nature is about disrupting the intended activity they were involved with. Thus they may either be used to help poke holes in the bad guy's claims or are put into place so the heroes can knock down their claims.

Naturally Truth in Television. It should be noted that 90 percent of the time when someone gets the courage to heckle it does not end well for them. The reason being is that often they make their move on private property where they can be asked to leave for disruptive conduct. Even if they're not thrown out, they are trying to heckle someone who has a microphone, thus few people can hear their comments but everyone can hear the responses. It is part of the business with stand-up comics, who are usually prepared for it; incidents like with Michael Richards are really fairly rare. (Let's face it, anyone who tries to heckle a professional Insult Comic probably deserves what they get.)

Compare Off the Rails, Insult Comic and MSTing. Overlaps with I Shall Taunt You if the intention is to provoke the target into doing something stupid. Not related to the firearms company Heckler&Koch.