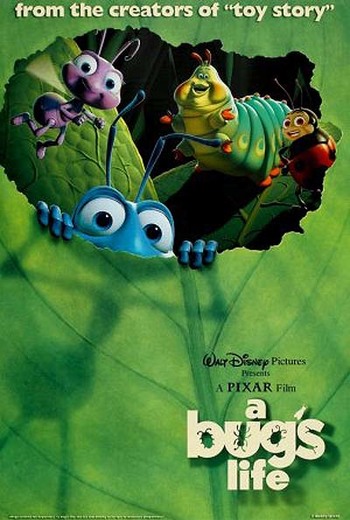 An epic of miniature proportions.
A Bug's Life (1998) is the second computer-animated film from Pixar. It's something of a twist on the fable "The Grasshopper and the Ants" meeting The Seven Samurai with a bit of ¡Three Amigos! thrown in for good measure.

The movie begins in a peaceful ant colony, which yearly is terrorized by a biker gang-esque group of grasshoppers (led by the intimidating Hopper), and the ants are forced to give them an offering of food. One year, an ant named Flik (considered a nuisance by the rest of the colony due to his inventions, which often cause more trouble than they're worth) accidentally destroys the offering. Hopper forces the ants to create a replacement offering, twice as large, giving them until "the last leaf falls" to comply. The ants, who need that time to store food for themselves to survive the winter, fear that Hopper's demand could ruin the colony. Flik volunteers to redeem himself by recruiting "tough bugs" to fight Hopper and his gang. Seeing nothing more than an opportunity to get Flik out of the way so he doesn't mess anything else up, the colony's ruler-to-be, Princess Atta, gives him her blessing.

Flik travels to "the city" (a bug city underneath a trailer), where he meets a bunch of recently-fired circus bugs. After seeing them perform, he mistakes them for warriors, and takes them back to the colony. The circus bugs are initially shocked when they find out why they're there, but eventually begin to love living in the colony, and agree to help Flik come up with a plan to defeat the grasshoppers. Will this be the invention which finally succeeds? Or will Flik's usual bad luck continue, leaving the colony to face the wrath of Hopper and his gang?

A Bug's Life, like most Pixar films, was a critical and financial success, and, with its Hilarious Outtakes, also started the Credits Gag tradition in Pixar movies.

This was Roddy McDowall's last film, Madeline Kahn's next-to-last film, and Hayden Panettiere's first film.note Although it wasn't the first to be released, as The Object of My Affection - she plays the mermaid in the opening credits - came out several months before.

A Bug's Life contains examples of:

Within the first five minutes of the movie, we are introduced to Flik and everything we need to know about him, such as his personality and his shortcomings, all within the short span of a minute and a half.

Within the first five minutes of the movie, we are introduced to Flik and everything we need to know about him, such as his personality and his shortcomings, all within the short span of a minute and a half.