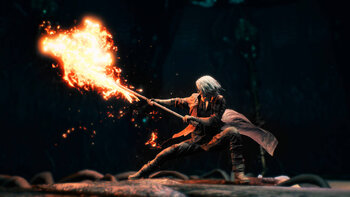 Since the dawn of time, man has used fire, and he has used sticks. And sometimes he has used both at the same time.

A burning torch isn't just useful for finding your way in the dark; it can also be used as a weapon too. Granted, this is not a very effective weapon in real life given the number of ways to put out a flame. To say nothing of the risk of burning yourself. Therefore, this weapon is more useful for intimidation or to set something else on fire, like a puddle of oil your opponent is drowning in. Of course if the flame is generated by supernatural means, this won't be an issue.

This trope comes in three categories:

A Sister Trope to Flaming Sword and Hot Blade. A Sub-Trope of Elemental Weapon and Kill It with Fire. See also Improvised Weapon and Improbable Weapon User. Compare Molotov Cocktail and Flaming Arrows.