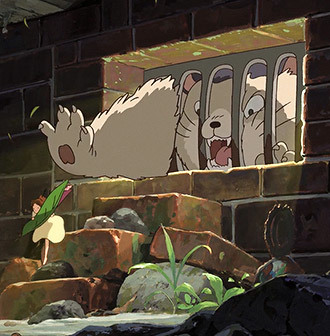 Bob is being chased and/or attacked by a Big Thing, which is probably some sort of monster. (The Big Thing can range anywhere from "10 feet tall" to "Friggin' Godzilla", just so long as it's bigger than Bob.) But Bob discovers a convenient hiding place, which protects him from the Big Thing because the Big Thing is too big to fit inside. This hiding place is called the Convenient Cranny.

The Cranny may be something like cave with a narrow entrance, or a doorway, or a gap between tree roots, or whatever. Often, the Big Thing will claw or dig at the edges of the Cranny's entrance, but this rarely works. Bob may now be effectively trapped in the Cranny until something kills or distracts the Big Thing, or perhaps the Cranny has a back door of some kind which allows Bob to get away on his own.

Compare Behind a Stick, Convenient Escape Boat and Corridor Cubbyhole Run. May overlap with Try and Follow.