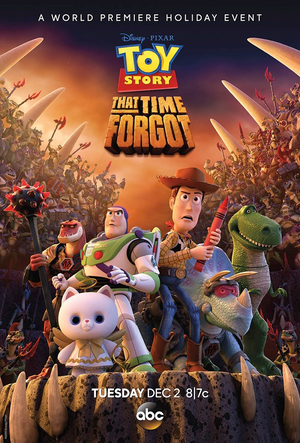 A Pixar-produced half-hour Christmas Special in the Toy Story franchise that debuted in December 2014, following Toy Story of Terror!. It was directed by Steve Purcell.
Advertisement:

Shortly after Christmas, Trixie is becoming tired of being cast as everything but a dinosaur during playtime with Bonnie. When she, Woody, Buzz, Rex and a Christmas ornament named Angel Kitty are taken by Bonnie to a playdate with a boy named Mason, they end up being left to explore while the kids are distracted by a new video game console. While traveling through Mason's room, they stumble upon a complete set of 80s-90s-esque dinosaur warriors called Battlesaurs. Trixie and Rex are quickly accepted by the powerful Reptillus Maximus, but soon find that much like a more dangerous Buzz, the entire set is unaware of their toyhood and the pterosaurian Cleric leading the Battlesaurs has been taking advantage of this ignorance...

It was the final Toy Story production to feature Don Rickles as Mr. Potato Head due to the actor's death in early April 2017, though he technically reprised the role in Toy Story 4 via unused recordings of him voicing the character.