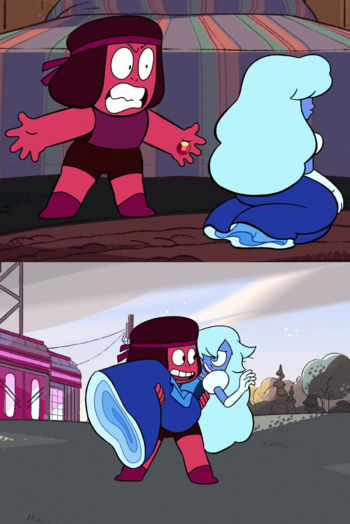 She's hot and she's cold, but they love each other all the same.
"We fight, we break up
We kiss, we make up"
— Katy Perry, "Hot 'n' Cold"
Advertisement:

The heroes share an incredible adventure that helps them develop strong feelings, as friends, lovers, or family. Then, there is a breaking point, a moment where they split. It may be an argument, a misunderstanding, a choice one of them makes... whatever the reason, their relation seems to be broken forever.

But we all know what’s going to happen next, don’t we?

Yes, they meet again, make up, reconcile, apologise and forgive, and forget about everything. The point of a Break-Up/Make-Up is to test the strength of the heroes' feelings, and to make the audience wonder whether they’ll come back together and have a Happy Ending.

This scenario is used so often in fiction that it would be easy to expect it whenever a story focuses on the relation of the couple. Over the years, it went from a major plot twist to a convention, to the point where most of the audience will generally expect it.

This trope applies not only to love stories (in which case it ends on a Last-Minute Hookup), but also to buddy movies. One of the main issues is that, since the breakup usually happens some time before the end, the time the heroes spend apart is therefore very short, and the makeup is quick to come. In long-running series, this can be avoided by making the split last several episodes, to let you wonder if the characters stay apart. Most of the time, however, it is used for one episode only. In this case, it is a Feud Episode, which centers around a Break-Up/Make-Up. This trope is very common in Soap Opera.

Compare Will They or Won't They? when the audience is left in doubt on whether a couple will form or not. Contrast No Romantic Resolution. The Second-Act Breakup is this trope applied to a movie or a play. Sister trope to Split and Reunion.