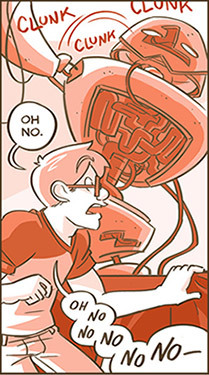 Something besides just a Humongous Mecha would be truly dandy right now...
"I am sensible. I am calm. I'll give you my answer calmly and sensibly, my final answer. My final answer is finally no. The answer is no! Absolutely and finally no! Finally and positively no! No! No! No! N - O!"
— Leo Morse, Force of Evil (1948)
Advertisement:

Alice is about to do something by accident, or on purpose, that Bob and Charlie don't want her to do. Let's say "knocking over a priceless vase". If they use a Little "No", they run the risk of Alice not hearing them and knocking it over. If they use a Big "NO!", they might accidentally startle Alice and actually cause her to knock it over. So what do they do? They go "Nononononononononononononononononono..." until either she stops, or knocks it over, causing it to shatter into tiny pieces.

This is not usually effective, as half the time, Alice will ignore them. In Comedy, the instances in which it does work are generally a Set Up to have the vase get smashed anyway, just after they were relieved that it wasn't broken. In Action and Drama, however, Alice is more inclined to listen, but may sometimes choose to do it anyway.

Essentially, this is to the Big "NO!" what the Cluster F-Bomb is to the Atomic F-Bomb. Contrast Rapid-Fire "Yes!".