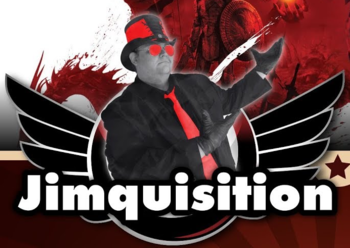 James Nicholas Stanton (born 1 January 1984), better known by the pen name Jim Sterling, is the host of the web video series known as The Jimquisition. Sterling is an independent pundit (formerly of Destructoid and The Escapist) focused on video games and the video game industry, known for his tendency to stoke controversy.

Sterling assumes the persona of a caricature of gaming journalists to make broader points about video games and the video game industry. Episodes can be found here

Just make sure to include the "the" as Jimquisition.com, for unknown reasons, is something rather different.

...as well as retired or rare series, such as:

Jim Sterling announced on November 14, 2014 that he would go crowd-funded via Patreon, so none of his anti-corporate videos would be powered by corporate-sponsored ads. Thus he will be free of editorial oversight as well as any hypocrisy. Donate to him yourself if you like

Don't confuse him with Jim Starling.

open/close all folders
Tropes Used in The Jimquisition
Born different, born innocent, born perfect, I'm not like you...

Tropes Discussed in The Jimquisition Episodes
I'm addicted to stress, that's the way that I get things done...

Tropes discussed in his reviews and videos include:

The Podquisition
Hey, hey, hey! Don't you know you're messing with the best now?

Tropes featured on the Podquisition: